S.I.N. HELLAS ( Salt Inclusive Nutriments HELLAS ) was founded in 1992 in Larissa city, Central Greece, and began its operation as a research and development unit for the production and marketing of several special feed additives for all livestock such as sheep, goats, cattle, beef, dairy cows, dry cows, poultry and pigs. These special additives are known as MINERAL LICKING BLOCKS & VITAMINS - MINERALS PREMIXES.

With their special composition and through their supplementary use to a good quality daily ratio in animals feeding, the licking blocks and the premixes achieve increased animal’s appetite and productivity, efficiency in milk and meat, improve the quality of the produced milk, lead to avoidance and prevention of diseases, better and easier pregnancy and generally offer a significant improvement of the animal’s overall productivity and health. With the power of specialization in this specific category of products in conjunction with modern technological equipment that it was equipped with, the company very quickly became the leader in the disposing of such products, covering the largest part of the Greek market, while at the same time started to export its products to several countries around the world.

In 1998 the company completed the construction of a new production unit, a factory equipped with cutting-edge technology, in the Industrial Area of Larissa where the complete company was relocated and operated integrated ever since incorporating several production lines, storing and loading warehouses and administration headquarter offices.

In 2002, the company, entering into a new development program, created new, high volume production lines and additional, bigger, warehouses initiating in 2004 its total 5.000 sqm coverage facilities in a 9.000 sqm land inside the Larissa Industrial Zone. 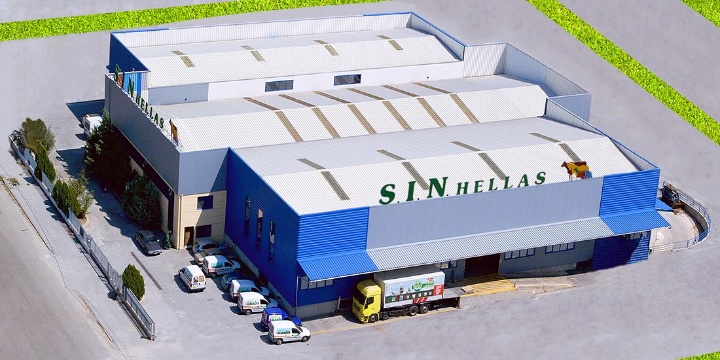 S.I.N. HELLAS company is operating in accordance with the major trading values and under the strictest ethical codes on personal, social and business levels by:

-Responsibly producing high quality products, good enough to promote animal’s health and productivity and capable only to finally benefit their life.
-Legally and honestly operating the business respecting ethically and morally our personnel, suppliers, business partners and customers in the best possible way.
-Decently and Loyally full filling our promises and respecting all our agreements and contracts signed with both local and international business partners keeping our word of honor even in the most difficult situations.
-Strictly dedicated to the animal’s welfare and health protection by research and development of top quality products through a team of expertise veterinarians and nutritionists.
-Transparently and clearly acting regarding to all the technical or other information we supply to our partners.
-Fortifying our country’s economy throughout our exports activity and income as we proudly export our high quality products worldwide.
-Supporting the total livestock sector by providing solutions and helping a huge number of farmers, veterinarians, nutritionists, zoo technicians and traders, thanks to our offered services and to our unique and innovative top quality products

*Prices are pre-tax. They exclude delivery charges and customs duties and do not include additional charges for installation or activation options. Prices are indicative only and may vary by country, with changes to the cost of raw materials and exchange rates.
Compare
Remove all
Compare up to 10 products